Model P Russian - In 1870 the U.S. Army ordered 1000 of the Model no. 3 American. Afterwards the U.S. military had no interest in the Model No. 3 design. The Russians, unlike the U.S. Military were extremely impressed with the Model No. 3 American. In 1871 officials of the Russian Military approached Smith & Wesson concerning the purchase of the Model No. 3 revolver. The Russians suggested a few improvements that were incorporated into the S&W design and a new .44 Russian chambering. The agreed price was $13.00 per revolver. The result was the birth of the ‘Russian’ Model and the purchase of some 130,000 revolvers by the Russian government. Thanks to our more intelligent Russian friends we now offer a great copy of the 3rd Model Russian revolver. 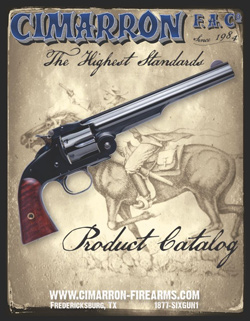